Raising a Child Who Respects Difference 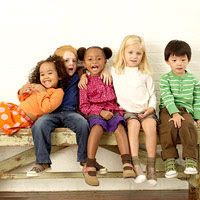 Buff Strickland
I'm playing The Game of Life with two wriggly 6-year-olds, my daughter, Tess, and her buddy Matthew. We're motoring along the board in our little plastic roadsters, and Tess arrives at the space that says "Get Married!" This is where you're supposed to add a spouse to the passenger seat. A blue peg stands for a husband, pink means a wife. Tess considers for a moment -- and chooses pink.
We live in Massachusetts, I should explain, where gay marriage is legal, a number of our kids' friends have two moms, and our grade schools sponsor rainbow-y floats for the local Pride Parade. Around here, most kids don't question the fact that you can marry a girl or a boy. The values my husband and I teach, the friends we have, the fact that we attended the joyful weddings of Barbara and Kristen, Annie and Mary -- all of it has created a child in whom tolerance shines like the sun in July.
Pop! That's the sound of my politically correct balloon bursting. A mere five days later, my 9-year-old, Will, storms home upset because a kid in class has been teasing him like crazy. My husband and I have been trying to manage this, but now the boys are at a tipping point. The kid called Will some choice swear words. "I wanted to say the F-word right back to him!" Will yells, tears now streaming. "And I know it's not right, but I really wanted to say the N-word too!"
The N-word. The sick ugliness of it. I had no idea he knew the word. Dear God, where did this come from? I take a deep breath and then start the damage control. But I'm dying inside.
So there you go, two stories from one American family. Maybe they mirror yours in ways that make you nod or wince or both? I don't care if you're a white mom from Richmond, Virginia, explaining to your son why a Confederate flag won't fly on your lawn even though his uncle flies one, or a Puerto Ricanabuela in the Bronx showing her grandson how to be more accepting of new Dominican immigrants -- we all have something to learn about teaching kids to respect people of different races, cultures, and lifestyles.
Use my family as an example. What did we do wrong? What did we do right? And how, day in and day out, should we teach our children tolerance, especially in the Age of Obama? Buff Strickland
Let's start by saying that I am white and heterosexual, and judging by our nation's latest census, the majority of you reading this likely are too. The truth is that unlike parents of color, who probably encounter issues of race more often than they'd like, white parents can largely avoid the subject, if only because you think that if you don't call attention to racial differences, your children will stay "color-blind" for as long as possible.
Think again. Children start to notice race when they're babies. We know this from research conducted in 1997 by psychologists Phyllis Katz and Jennifer Kofkin for the Institute for Research on Social Problems, in Boulder, Colorado. They paraded a variety of faces in front of kids ages 6 to 18 months old and noted that children stared longer at the faces that were a different race from their own (the longer the gaze, the more you know babies are taking in new information). Their research also found that by age 3, kids prefer playing with others of their own race rather than outside it. This isn't racist behavior -- it's normal to gravitate to what's familiar. How, then, do children slip from preference to prejudice? "Kids' views only become prejudiced when they start linking physical traits to flaws in character," says Allison Briscoe-Smith, Ph.D., a professor of psychology at Palo Alto University, an African American, and an expert on how children learn about race. "We adults are the ones who ascribe malice to simply noticing racial differences." Remarking on race, therefore, isn't the problem.
What is? Two words: parental silence. We don't talk about race and difference enough. Parents of color may wish to avoid painful discussions -- but then they don't prepare their children for handling racist comments that may come their way. White parents often stay mum because they fear they'll say something offensive. Thanks to this misguided censorship, kids think race is a loaded subject and that translates to "something bad." And it doesn't take too many steps to go from bad to biased.

Don't Wait For Them To Bring It Up

With other loaded topics -- sex, drugs, bullying -- we might wait for the teachable moment or signals that our kids are ready to learn more. This strategy doesn't work for teaching tolerance. "Kids know race and ethnicity are sensitive topics, and they know they are not supposed to talk about them," says Michael D. Baran, Ph.D., who is white and an anthropologist and cognitive psychologist at Harvard, specializing in how children learn about race. "And you don't tell kids in a direct way to be tolerant -- that's an 'eat your vegetables' kind of approach. Instead, give them the tools to understand the complicated social world and the confidence to ask questions when they are confused." Be prepared for questions like the one a white 3-yearold asked Dr. Briscoe-Smith: "Does black skin rub off?"
Age 3 -- or even 2 -- isn't too early to start a conversation. Talk to your child about the world and all the different people within it. Pique his curiosity, get him thinking, and field questions without flinching. Bring home books about kids in other countries, try new foods, and learn some simple words in an unfamiliar tongue. If your child is in school, ask his teachers to give you a heads-up when they're discussing different cultures or civil rights in class (Martin Luther King Day is an obvious time). That way, you can bring up the topic at home. "If you do these things, respect and understanding are likely to follow," says Dr. Baran.
While you're accentuating the positive, acknowledge the negative too. It really helped me to read a booklet called Beyond the Golden Rule: A Parent's Guide to Preventing and Responding to Prejudice, from The Southern Poverty Law Center's Teaching Tolerance site (download the free PDF at tolerance.org). It advises parents "to be honest about in stances, historical and current, when people have been mistreated because of their differences." In other words, point out why a character offends on TV or in a movie. Bring. It. Up.

Books and festivals are great -- but true respect sinks roots when diversity comes in the form of friends and neighbors. "I've been thinking about this for a long time, and I believe that modeling is more powerful than teaching," says Cynthia Garcia Coll, Ph.D., a psychology professor at Brown University who focuses on the role of ethnicity on children's development and is herself Puerto Rican. "As a parent, if I have diverse friends then my kids will take diversity for granted." Click. My kids do take gay rights for granted; we have gay friends. My son wanted to use a racial slur; we have few friends who are people of color. Surely, there's a link.
If you have friends from all different racial and ethnic backgrounds, mazel tov. But if not, and you live in a homogeneous community, then this is where it gets hard. "You need to be purposeful about this," says Lecia Brooks, the director of the Teaching Tolerance program at The Southern Poverty Law Center, and who self-identifies as an African American and a lesbian. "People tend to associate with others who are like they are, who share their worldview, people they're familiar with. Oftentimes, those people look the same racially and culturally. So it takes a sustained commitment to break out of that and expose our kids -- and ourselves -- to something different."
Clearly, the best way to do this is to pick a diverse area to live in and a multicultural school for your children. If these aren't options, consider choosing a place of worship with a rainbow congregation. Find extracurricular classes or sports teams that draw children from varied backgrounds. Take your kids, on a regular basis, to a playground in a more mixed area, if you live near one. Seek out professionals of color: dentists, doctors, teachers. "You may think that's kind of ridiculous, to pick a professional on that basis," says Carmen Van Kerckhove, the president of New Demographic, a diversity-education firm, and a blogger at antiracistparent.com, whose heritage is Chinese and Belgian. "But you pick someone based on lots of different factors. This is just one additional consideration to think about."
Shared from www.parents.com